This video is available to customers of the following class(es):

Purchase the class above to get instant access
OR
Become a KnitFreedom Member
and get this and over 450 premium knitting videos for just $12.99/month.

If you own this class or are a KnitFreedom member, please LOG IN to watch. 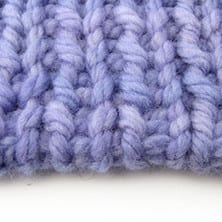 The Italian Tubular Cast-On creates a true invisible ribbed cast-on edge for 1x1 rib. The stitches flow from the front to the back with no discernible edge.

There are two steps to this cast-on: the Italian cast-on and 2 or 4 tubular set-up rows.

2. For the two tubular set-up rows, work the first and last stitches, and slip the purl stitches with the yarn in front and knit the yarnovers.

3. At the end of the first tubular set-up row, work the double-loop that is the first cast-on stitch together to make it one stitch.

4. If you want to use this cast-on in the round, I recommend that you work the cast-on and tubular set-up flat like I show in the video, then divide your stitches and join for working in the round. Use your tail yarn to sew up the little gap created by working the first rows flat.

5. This cast-on can also be used for 2x2 rib - just follow the directions here and then adjust the stitches according to the instructions for the Italian Tubular Cast-On for 2x2 Rib.


Learn Everything There is to Know about Cast-Ons!
Visit our Cast-Ons Page.

Share this ArticleLike this article? Email it to a friend!
Email sent!