Skip to content
We are experiencing a problem with the video player on our online classes. We are working to fix ASAP! March 20, 3:15pm CST.
Available Now! New Seamless Dog Sweater Video Knitting Class

My Classes » Fair-Isle Knitting
You don't own this class, but you can preview the content below. Click here to learn more and purchase. Or Log In to access your class.
If you purchased this class as part of the Handmade with Love Bundle from Ultimate Bundles, please contact us at [email protected] and we will add the class to your account. Thanks! 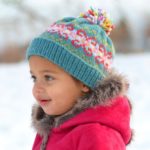 Fair-Isle knitting is the art of knitting with more than one color in a row to make knitted color designs in your projects.

Fair-Isle knitting is a useful intermediate color-knitting technique that is not only steeped in history but also looks beautiful in today’s designs.

This hands-on guide is going to teach you everything you need to know about how to do Fair-Isle knitting, step-by-step.

A note about the videos in this course: each of the embedded videos on this page was filmed in full-screen high-definition. You can click the “full screen” icon in the lower right-hand corner of each video to make the video as large as your computer screen. Enjoy!

What You’ll Learn In This Course First, I’ll clarify exactly what Fair-Isle is and what kinds of projects it is used for.

I’ll also show you the differences between Fair-Isle and Intarsia (another common type of color knitting). Then we’ll begin to learn the step-by-step skills involved in Fair-Isle knitting.

Everything about Fair-Isle knitting that confuses a new knitter or frustrates an experienced one is covered here.

First I’ll teach you how to easily read charts (a key skill for color-knitting projects and one that often scares away newer knitters).

Then I’ll show you ways to hold the yarn comfortably whether you’re an American-style or Continental-style knitter, and I’ll teach you what you can do if you’re comfortable with both styles (or feeling adventurous and want to learn a new style).

I’ll then teach you how to knit Fair-Isle on a flat project, which you’ll be able to use to knit patterned throw pillow covers, for example.

Along with these main skills, I’ll teach you tons of supplementary knitting techniques to help make your Fair-Isle projects a success, like i-cords, picking up stitches, and tricks for garter stitch in the round.

I’ll cover in-depth every aspect of the biggest bugaboo of Fair-Isle knitting: getting your tension right. From floats to twists to consistency to tangling yarn, I’ll give you examples of how it can go wrong, and I’ll teach you how to do it right.

You’ll also learn how to recognize and fix mistakes in Fair-Isle knitting, so you can feel confident trying projects even if they look hard.

The Project You’ll Be Knitting The project that we’re going to make together as we learn all of these skills is a felted bag.

Not only does it require you to learn and practice all the major skills involved in Fair-Isle knitting, it is ideal because it’s quick and forgiving.

Because it’s made with bulky yarn, you’ll knit it fast, and the felting obscures any problems you may have as you work on perfecting your tension.

To help you keep practicing and improving on your own, I’ve put together a list of patterns for you try as well as recommendations for books and stitch-motif collections that you may want to add to your library.

Fair-Isle knitting is the best technique for making small or repeating color designs in your knitting. The floats across the back of the work add a second layer of thickness of the fabric, making it extra-warm. But because the floats are visible on the “wrong side” of the work, Fair-Isle projects aren’t really reversible.

If you want to make colored designs on a reversible project, like a scarf, you’ll want to try Double Knitting.

Also, long floats can easily catch and snag on jewelry, which is why patterns that call for more than 10 or 20 stitches of one color in a row (therefore leaving the other color in a large float across the back) are best left to other techniques.

There is a way to prevent long floats on patterns like these, which I will teach you, but it’s not a common issue that you come across in most well-designed Fair-Isle patterns.

The Difference Between Fair-Isle and Intarsia Knitting

In Fair-Isle knitting, both yarns are carried across the whole row, and each yarn is used in different stitches throughout the row.

Because of this, you almost always find Fair-Isle knitting used with in-the-round projects like hats, mittens, or sweaters, where you want the color patterns to go all the way around.

In Intarsia knitting, different pieces of yarn are used to knit separate blocks of color of any size, for example, a yellow duck on the front of a blue baby sweater. When an image appears in just one place on the garment, as in the baby sweater, there’s no need (and, indeed, it’s quite messy) to carry both colors around the whole sweater.

So the color is only used when it is needed, and left hanging when it’s not, ready to be picked up on the way back across the row. Intarsia projects are almost always knit flat (back-and-forth).